Rockstar Spud has just declared to the world that he’s a jerk.

When you’re Dixie Carter’s chief of staff, that’s probably a given. Since winning the first series of British Boot Camp, which aired at the start of 2013, Spud has become a fixture on TNA’s television shows. And he very rarely gets stagefright.

“The only time I’m ever nervous about being on camera with Dixie is when I have to save her from a near-death experience. I am literally saving that woman’s life. I am a hero. I’m Mr Carter’s hero [Ethan Carter III] as well. I was born a hero. This,” he concludes dramatically, “is what I was born to do.” END_OF_DOCUMENT_TOKEN_TO_BE_REPLACED

Question: what next for TNA?

You’ve probably seen by now that gossip site TMZ are reporting that Spike TV will no longer be airing TNA programming on their channel.

There have, of course, been rumblings for a while suggesting that Jeff Jarrett’s new promotion, Global Force Wrestling, would be aiming for a slot on Spike.

Leaving that aside, the current TNA/Spike deal is reported to run till October, so it won’t be disappearing from American TV screens quite yet.

And of course it’s possible that in the interim, the company will find another TV channel to air its programming.

But perhaps this is a big opportunity for TNA.

END_OF_DOCUMENT_TOKEN_TO_BE_REPLACED

I usually do a little write-up of shows, taking care to personalise it and make sure that I’m documenting my experience and perception of facts.

I’m not going to do that for last night’s FPW show – but what I will do is state an undeniable fact…although it’s disappointing that Joel Redman and Martin Stone weren’t kept on in WWE for longer, it’s absolutely brilliant to have them back here in Britain.
END_OF_DOCUMENT_TOKEN_TO_BE_REPLACED 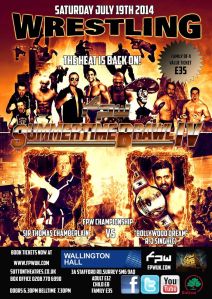 I constantly recommend FPW for anyone looking for a family-friendly promotion with high-quality wrestling – and I’m clearly not the only one, as they’re into their fourth year of life in an industry that chews up and spits out companies very swiftly.

“Our fans are the fuel that drives our company,” says co-founder Matt Burden. “They’ve followed us for three years and now into the forth and we feel truly blessed to have the support and energy they provide.”

The audience will have a little treat direct from WWE at next weekend’s Summertime Brawl, with Martin Stone and Joel Redman (NXT’s Danny Burch and Oliver Grey) making their debuts and facing each other. END_OF_DOCUMENT_TOKEN_TO_BE_REPLACED

Question: what do WWE have in store for Emma?

I’m still not entirely sure what to make of this week’s Emma-related saga. (Melodr-emma?)

After news broke of her arrest for sixth-degree larceny (or ‘shoplifting’, as it’s known), WWE were swift to update their website with news of her release.

By the time I woke up the next morning, she’d been reinstated, and WWE were talking ominously of the further action they intended to take in recognition of her law-breaking.

I found the entire episode quite puzzling. END_OF_DOCUMENT_TOKEN_TO_BE_REPLACED