Exclusive: Kharma speaks! Returning to the indy circuit, thoughts of retirement – and Dancing with the Stars 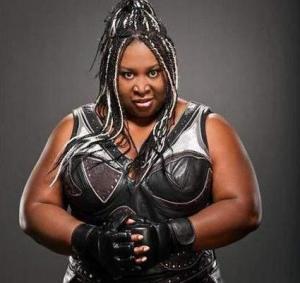 In Part One of our exclusive interview, Kharma aka Amazing Kong talks to TOWIS editor Carrie Dunn about her return to the independent wrestling circuit, why she was thinking of retiring, fighting against injury – and why she loves reality television…

It’s fantastic to be talking to you – and fantastic to have you fully back on the indy scene.
I am fully back on the indy scene – not necessarily a full schedule, more like a half-schedule, I am working against injury, two bulging discs, so I’m working a half-schedule just to make sure my name stays semi-relevant, and media-wise I’m ramping it back up. I disappeared there for a while – the only person on my Facebook was my manager, and I hadn’t tweeted in forever. I went from winning awards for tweeting to just being ghosted out, so I’m coming back!

Why did you take a step back? Was it deliberate?
A little bit. I think after leaving WWE and just focusing on that and figuring what’s my return plan – if there’s a return plan – what’s next, who am I, what do I do? All that was going on. I would seriously look at my phone and think, ‘What am I going to tweet today? I have no idea what I want to let the world in on right now.’ I always want to be genuine. I don’t want to tweet for the sake of tweeting. I want to let people know what’s going on with me, and I just wasn’t up for sharing at the time. But I’m good now.

And you’re properly into your reality TV at the moment!
Thank GOODNESS that I have a DVR box that can record six things at the same time – God forbid I should miss RAW while watching Dancing with the Stars! Alfonso Ribeiro did the Carlton, he got all tens, I watched it like six times – every two minutes you could hear [she begins singing, ‘It’s Not Unusual’] – it was just awesome, I am absolutely loving this season.

You should totally do Dancing with the Stars.
Oh my gosh, I can shake a tailfeather. That’s something I’d love to explore once I get rid of this back injury. I’d love to win one for wrestling.

Yeah, Jericho let the side down on that!
[laughs] They’d have to find a partner big enough to lift me as well. I want to do a lift. If I’m going to dance, someone is going to lift my ass up. I want to do at least one Jennifer Grey lift! I don’t care if they have to get a crane!

That’s a hell of a time in an industry that chews people up and spits them up – in-ring competition for twelve years is a long time.
It is, especially to maintain the schedule and the type of matches that I perform – I know that’s hideous of me to say, but it’s what I do for a living, it’s not what I do on the weekend or every once in a blue moon, it’s my livelihood and has been for the last 12 years. It’s been a blessing. For women, if we’re lucky, we get eight to ten [years], but thank goodness I’ve cultivated a character that is timeless.

But you’ve talked previously about signing with WWE and saying you were close to retirement then. Is that true, and if so, why were you thinking of retiring?
I was. I was working against an injury back then, actually. I was limping around towards the end of my TNA days, which probably contributed to me having such short patience with TNA, knowing that my body was wrapping up, so I needed to make my dough and secure my nest-egg [cackles]. But I didn’t know, other than WWE, what else was there for me to conquer. I was the only woman – actually the only person ever – to hold the AWA and NWA titles simultaneously. I did the TNA belt, the All-Japan women’s belt, tag belts, NWA and in Japan; I held many titles except for going to WWE, so that was what was left for me to do.

In my community, people thought that they knew what Vince McMahon likes [laughs]. ‘Oh, it’s such a shame Vince would never hire you.’ That’s what I would hear all the time, and when you hear that all the time from people who should know, you think, ‘Oh, I guess they’d know,’ and you start to believe it. So I thought, ‘That’s a really big long shot – I need to start thinking and planning what’s next for me.’

So did you have anything to fall back on? Had you got any alternatives in mind?
Before I became a wrestler, I had my own business, and I was a social worker, and ran non-profit youth programmes, so that was something I could always go back to – but once wrestling gets a hold of you, it keeps hold of you. There isn’t a rush you can get that carries the rush of performing in front of a live audience. It’s unique and it’s awesome. When I was younger, I loved soap operas, and I was always peeved when someone decided they didn’t want to do a series any more – so I didn’t want to do that to my fans, who have been so supportive of me and made me who I am and have given me such great experience, so I’m going to ride this career till the wheels fall off!

In Part Two, find out what she really thinks of the current crop of WWE Divas, who she rates from the British scene – and what happened before THAT Royal Rumble return…as well as her new Kickstarter project!

This entry was posted on Wednesday, October 8th, 2014 at 8:44 am and is filed under interviews. You can follow any responses to this entry through the RSS 2.0 feed. You can leave a response, or trackback from your own site.

3 Responses to Exclusive: Kharma speaks! Returning to the indy circuit, thoughts of retirement – and Dancing with the Stars