King of Trios; or how I learnt to stop worrying and love CHIKARA

When I first started watching CHIKARA, a friend of mine offered to lend me his collection of DVDs so I could catch up. He began going through the storylines, filling in the history, trying to make sure I knew as much as possible about all of it before I got any further into it.

And that interested me from an objective point of view. In my academic life, my thesis was on female soccer fans in England; and one of my arguments there was that in such a macho environment, women find themselves asked to prove their fandom again and again and again, in a way that men aren’t. There are trivia quizzes, there are interrogations of attendance, there are comments about appearance and “which player do you fancy, then?”. Fighting one’s corner is stupid, and exhausting; but so often necessary.

But it wasn’t that way with CHIKARA. I fell in love head over heels and that was it. CHIKARA asks for nothing more from me. The fact that I love it is enough. And it loves me too.

“Love” isn’t me exaggerating, either. (And again, let’s be real here – I’ve been known to be a bit of a drama queen at times.) The feelings I have for CHIKARA are that intense and that profound.

Don’t scorn me. Don’t trivialise it. Maybe you should think about the things you have in your life that are as special as this. If you had the choice, and money was no object, how would you spend a day at leisure? Watching a sports team? A wall-to-wall boxset marathon? Going to a matinee and then an evening show at the theatre or the cinema? Perhaps.

But would that make you laugh until your stomach hurt, make you so anxious that you can’t breathe properly, make you cry until your eyeliner streaks, make you sing, make you stand, make you cheer? All in the space of three hours?

This is what CHIKARA is to me. So, those who don’t have that, envy me. This weekend I soared over those peaks – and sure, now I’ll have to return to normal life and deal with the tedium of reality. But at least I had these last three days.

In summer last year I was looking at my bank account and wondering if I could possibly go to King of Trios. Financially it looked doable; logistically, with the venue being miles from decent public transport, it really wasn’t. I sighed, and tweeted mournfully and wistfully, putting it once more on the to-do list at some point in my life.

A few months later, CHIKARA announced that this year’s King of Trios would be in England.

Ticket buying was chaotic; hotel booking was panicky; surprisingly, the train travel was the easiest element. I didn’t know who’d be on the card or what to expect over the weekend; I just knew that I had to be there, and I was going to be there.

After six months of patient preparation, the weekend was finally upon us. I’m not someone who goes through matches and notes down moves and awards ratings. To do so at CHIKARA would be even more self-defeating. It’s an alternate universe, one that requires your total investment. Forget your five stars on offer; they are needless and unwanted. If you want to watch the matches yourself, you can do – the entire event is already available to pre-order.

But it won’t be quite the same as being there, will it? It never is.

I’ve come out of the weekend with a couple of new favourites, who I’d not seen wrestle in person before. Dez Peloton were in the first trios match on Friday night and were promptly and ever thereafter adopted as “my boys”. I got myself a blue t-shirt, men’s fit of course, priced at what my boys referred to as “twenty of your England dollars” and picking up a bike bell as well; and with the brilliant eye and skilful hand of my friend Chris it was snipped and cutely adapted, and I proudly wore it all day Saturday. (Donald Kluger greeted me in his blue Lycra skins: “HEY, LOOK, WE MATCH!”)

I’ve come out of the weekend having cried my eyes out on Saturday evening, watching Mike Quackenbush and Johnny Kidd’s rematch under World of Sport rules. Why did it make me sob so hard? These men are friends, they respect each other, and every so often they smile at each other to note a particular piece of skill. And that tears at my heart in a way that a more cartoonish scene wouldn’t, or that a match fuelled by sheer aggression and hatred wouldn’t; what we were presented with was technical skill and competitive spirit, neither of which can ever be dulled. Their words of appreciation for each other at the end intensified that.

I’ve come out of the weekend with continued confusing and conflicting feelings about Chris Brookes, who remains one of the most compelling and yet completely grotesque wrestlers I’ve watched regularly on the British scene. He’s hilarious, gifted, twisted, and amazing; and he got a whole crowd to boo him for being mean to an ice-cream. That’s some talent.

I’ve come out of the weekend more firmly convinced than ever that Pete Dunne is set right for the top. Watching him is almost a masochistic pleasure; what he does is so cruel, so manipulative, yet done so beautifully you want to see what he does next. Watching him with Moustache Mountain this weekend was a fascinating dynamic; Tyler Bate and Trent Seven, and indeed the crowd, react to him as if he is an out-of-control school friend. It’s not so much about outrage and horror; it’s more disbelief that he’s actually doing what he’s threatened to do, and more than that he loves it.

I’ve come out of the weekend having seen the Sendai Girls wrestle in person. Live. Right there. In front of me. Before, they were just legends. Now, they’re real people. Waiting for them to come out for the Trios final was an exquisite anticipation. Watching them in the Trios final was a privilege. 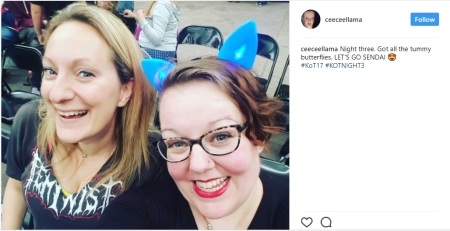 I’ve come out of the weekend having laughed so hard I thought I was about to be sick. Once was when Team Revival took it in turns to flip out of the ring – first Jonny Storm, then Jody Fleisch. Johnny Moss stood there watching his colleagues, and was urged by the crowd to copy them. I turned to Chris and said, “Mossy won’t do THAT.” And then he did. It was hilarious because it was so unexpected.

The other time was when Damian Dunne – chief deputy of the No Fun Police – tried to lure Officer Warren Barksdale to his side with talk of free healthcare…and promptly got cheered to the rafters, with an accompanying chant of “NHS! NHS! NHS!”

That’s what happened in the ring, and you can see all that for yourself. What made the weekend so special was everything around the event itself.

Take, for instance, that bit where the “NHS!” chants hit. The way the room was set up, you could occasionally see the wrestlers behind the curtain, perched on stairs and watching the other matches. Then, you could see them laughing just as hard as any of the fans in the audience. Often, I’ve complained about being able to see wrestlers peeping through to the show, thinking it looks unprofessional, and that it pulls at the fourth wall; at CHIKARA it seems collegial and correct.

Take, for instance, Vlad Radinov, party tsar and ring announcer. He tweets occasionally about his craving for British chocolate, most notably Crunchie bars. Presenting him with a handful of them was easy to do – and possibly the most rewarding couple of pounds ever spent. A grown man has never looked so happy to be given four chocolate bars. He thanked us profusely, hugged us both, and we came away delighted that he had declared us his favourite fans. And I wondered how that had been so straightforward and I hadn’t felt awkward or anxious, particularly about being hugged, as I don’t tend to like being touched by people I don’t know very well (or sometimes by people I do know well).

Then I realised – he’d asked us if he could hug us. It seems obvious, but if you’re someone who’s tactile and generally socially adept you might not think of it. I was prepared for it so I knew what was happening; it is entirely reflective of the way CHIKARA operates, with actual respect for its fans. 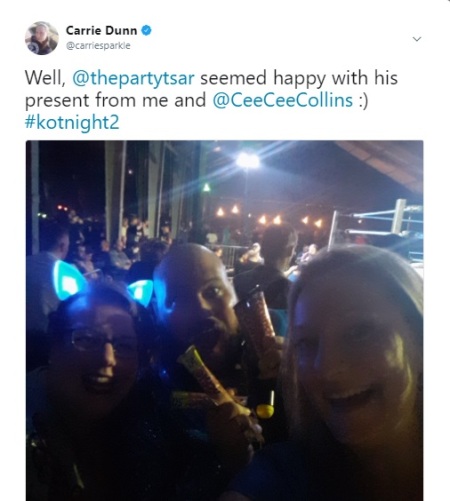 Of course, that’s how it was this weekend. And yes, I know – it’s essentially a fairytale world. On one level, I’ve just spent three days feeling sad about the pent-up upset and anger of an Ant, laughing about an ice-cream pinching the backside of a wolf, booing someone who’s actually a Facebook friend of mine and is absolutely lovely in real life.

Are you going to tell me it’s “fake”? Because it’s not. Even if you leave aside the genuine physical punishment wrestlers take – and they do, but they’ll tell you about that more than I can – if you measured my adrenaline levels this weekend, or my tear duct activity, or the wear and tear on my voicebox, you’d agree – it’s been as real as real can be.

Yes, loving CHIKARA in the way that I do means suspending one’s disbelief and throwing oneself wholeheartedly into the universe that’s unfolding there in the ring. But flick through your memory banks, think about a different situation, and you’ll be able to empathise; we all create delusions for ourselves in the name of love. CHIKARA asks for nothing but that love, and it will always love me right back, unconditionally. That seems a pretty good deal to me.

This entry was posted on Sunday, September 3rd, 2017 at 9:12 pm and is filed under fact. You can follow any responses to this entry through the RSS 2.0 feed. You can leave a response, or trackback from your own site.