I’m writing this shortly before the programme goes to air, so spoilers within, of course… END_OF_DOCUMENT_TOKEN_TO_BE_REPLACED

Some reactions to last night’s pay-per-view. Spoilers abound throughout, as does enthusiasm about good professional wrestling.  END_OF_DOCUMENT_TOKEN_TO_BE_REPLACED

Question: what are your predictions for tonight’s Extreme Rules?

END_OF_DOCUMENT_TOKEN_TO_BE_REPLACED

Question: who should Evolution’s fourth member be?

So Evolution have returned, ten years on from their original incarnation.

Of course, the original idea was that the quartet embodied the best of the past, present and future of professional wrestling – but a decade later, they’ve all stepped up a generation. If Triple H is Ric Flair, Batista is Triple H, and Randy Orton is Batista, then who’s going to be Randy Orton – the new blood who can blaze a trail in the industry?

The answer is obvious.

END_OF_DOCUMENT_TOKEN_TO_BE_REPLACED

Question: is this a changing of the guard in WWE?

After Wrestlemania, there was talk about how this was a new generation of WWE talent taking over. Undertaker lost his streak; the New Age Outlaws and Kane were squashed by the Shield; and Daniel Bryan defeated the Authority to become the face of the company.

And last night’s RAW seems to consolidate that view.

There were vignettes for Adam Rose and Bo Dallas; Emma and Summer Rae featured in another mixed tag and got big cheers; Cesaro is the new Paul Heyman guy; Lana introduced the Bulgarian Brute Alexander Rusev, who dispatched Zack Ryder; and perhaps most amazingly (but wonderfully) Paige won the Divas title on her debut, pinning AJ Lee.

At the end, as the stable formerly known as Evolution retreated in the face of Bryan and the Shield’s dominance, they looked old…old and tired…and the once-invincible bullies were helpless.

I am excited for what’s coming up on WWE. I hope this fantastic and sparkling promise for the next 12 months comes to fruition.

The wrestling fan’s ersatz bank holiday weekend, Wrestlemania 30 was last night, and I had a lot of thoughts about it. Spoiler, obviously.

END_OF_DOCUMENT_TOKEN_TO_BE_REPLACED

Question: what was your WWE Best PPV match of 2013?

To be honest, give me a show or compilation with Renee Young presenting and you can guarantee I’ll watch – she’s smart, she knows her stuff, and she has a real personality – a terrific addition to the WWE’s reporting team.

But even with Young doing the links between matches, it seemed a bit strange to me to watch PPV matches in isolation – out of the context of their PPVs and their broader storyline. Although I saw all last year’s WWE PPVs, watching them back in this setting was like watching them for the first time, entirely free of the baggage I brought to them initially.

Obviously MY best PPV matches of 2013 would mostly involve the Shield, CM Punk and Daniel Bryan, but I understand and appreciate that this has to be evened out to appeal to people who aren’t ladysmarks, so of course you’ve got John Cena v the Rock and Alberto Del Rio v Rob Van Dam as well. END_OF_DOCUMENT_TOKEN_TO_BE_REPLACED

Fact: The Shield are the highlight of 2013

When the Shield first emerged at the end of 2012, smarks happily name-dropped about how they’d seen these guys wrestle on the indy circuit (or in FCW) under their previous names.

Just over a year later, nobody refers to them as anything other than Dean Ambrose, Seth Rollins and Roman Reigns.

That proves just how successful the Shield have been – not only did they obliterate most of the roster, they’ve also obliterated the baggage that inevitably comes with a pre-WWE wrestling career in the internet age.

END_OF_DOCUMENT_TOKEN_TO_BE_REPLACED

Fact: Monday Night RAW can be amazing just for half an hour 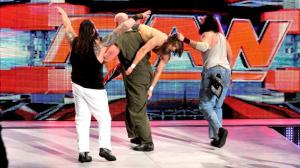 You might have seen on Twitter today that some of the folk in the British wrestling community have been posting only nice tweets – none of the negativity and bitching that we normally get on there.

And in that spirit, I’ve revised the blog I was going to write today. END_OF_DOCUMENT_TOKEN_TO_BE_REPLACED

It was an impulse purchase after the announcement of that six-man tag match, OK? I don’t normally hold with paying six quid in booking fees, but I felt the investment would be worthwhile. And it was, kind of. (Spoilers if you’re reading this before the show airs, or if you particularly care about what happens on Superstars.) (Though why you should when WWE don’t, I’m not quite sure.)
END_OF_DOCUMENT_TOKEN_TO_BE_REPLACED