Behind the scenes: Leicester Championship Wrestling

When you get invited to a show that’s in a college, you think you know exactly what you’re going to get.

Leicester Championship Wrestling – housed in Brockington College, Enderby – doesn’t fit those stereotypes. The shows aren’t in a musty old gym; nor is their ring held together with bits of tape. With a sunken floor for the ring, a stage and ring catwalk, bleachers at the side, a proper lighting rig, plus tiered seating available when necessary, this is a very nice venue indeed for wrestling. Indeed, as promoter John Shipley spent the hours pre-show checking that the custom-made titantrons were working on both screens, it was obvious from the outset that this was not your average Britwres show in a school. END_OF_DOCUMENT_TOKEN_TO_BE_REPLACED

“Growing up, I had, like, one friend who was a wrestling fan,” says comedian and promoter Chris Brooker. “Then as soon as I got into comedy, it was like a dating service – ‘Have you met this guy? He likes wrestling too!'”

Brooker and Billy Kirkwood debut their show ‘I Am The Tag-Team Champions’ at Edinburgh this weekend. He describes it as a “love-letter to professional wrestling”; after a lengthy discussion about how they could make a show about wrestling appeal to a wider audience, they decided not to bother, and instead opted to make a show just for people who like wrestling.

The poster for the show is stylised artwork of several sets of tag-team champions, plus Brooker and Kirkwood. How on earth did they decide who to include and who to omit?

“We had a list we sent back and forth,” he says. “Some were no-brainers – the Legion of Doom, the Hardy Boyz, and Kane and Daniel Bryan, of course. Then as soon as we showed people in, they’d complain about who wasn’t on it. We could have made it twice the size and people would still have been like, ‘But where are David Otunga and Michael McGillicutty?'” END_OF_DOCUMENT_TOKEN_TO_BE_REPLACED

Question: is WWE ‘ahead of the curve when it comes to accepting sexual orientations’?

Im more than proud of Darren Young for having the courage to come out. The trust is that WWE & Pro Wrestling in general have long been ahead

.. of the curve when it comes to accepting sexual orientations

Reading that couldn’t help but remind any wrestling fan both of the scores of gay jokes used in storyline to imply that someone is “less of a man”, and of the real-life tragedy of Chris Kanyon. END_OF_DOCUMENT_TOKEN_TO_BE_REPLACED

Fact: it matters that Darren Young has said he is gay

If you’ve not seen it already – and don’t have a moral objection to clicking through to TMZ – Darren Young gave an interview at LAX saying that he is gay.

It’s an interesting short chat – Young doesn’t seem to want to have an extensive discussion about it, after his initial statement, and why should he? – and it’s important.

Already the comments are coming in, and amidst the ones that are happy and supportive, there are the usual whiners, who say something like this: “Why does it matter that he’s gay? I don’t go around telling everyone that I’m straight.”

Well, it does matter. The interview touched on one of the reasons why – it shows that gay men can make it to WWE and, as Young says, be happy and live their dream.

But it also matters because at shows in 2013, wrestlers still do the spot where one’s on all fours and one’s kneeling behind him, and they encourage people to laugh at the very concept that such very manly men could ever be gay.

It matters because crowds still chant “Gay boy!” at heels.

It matters because WWE had the chance ten years ago to promote gay characters in wrestling, and instead they put the cause back by another ten years.

It matters because Bruce Hart’s book dismisses Adrian Street as having a “fag gimmick”.

It matters because there have been gay and bisexual male wrestlers before who have never publicly said that they are gay.

It matters because not so long ago people lost their jobs – in wrestling and in other industries – for being gay.

So it might seem odd for congratulating someone for talking about their sexuality – but this is big news. And it matters. 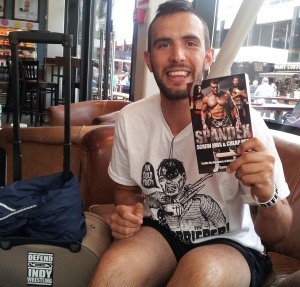 Last time I interviewed Eddie Dennis (for Spandex, Screw Jobs and Cheap Pops), he was telling me that he’d readjusted his goals in wrestling in order to prioritise his personal life and his day job.

And since then his in-ring career has gone from strength to strength – most recently taking on Doug Williams at PROGRESS.

“That’s the first time I’ve wrestled an established TV talent,” he says. “I’ve wrestled guys who have gone on to be on TV, like Joel [Redman, now Oliver Grey in NXT], but never someone who is already established. Doug is probably one of the biggest active British names – [William] Regal, maybe, is the only person above him in the echelons of British wrestling, so how could you not be excited about wrestling him?” END_OF_DOCUMENT_TOKEN_TO_BE_REPLACED

This might be a bit of a ramble, because I don’t actually have any answers – but I am sick and tired of going to shows where audience members take it upon themselves to try and fight wrestlers, or think they fancy a go in the ring.

Last night at House of Pain: Evolution, a couple of men (with children! What a great example to set) kept trying to get themselves involved with wrestlers, starting with Bam Bam Barton (forcing the match referee to leave the ring and separate them) as well as Kris Travis (who managed to shrug them off).

So what can be done to stop some people ruining the enjoyment of others? END_OF_DOCUMENT_TOKEN_TO_BE_REPLACED 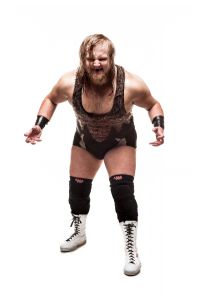 The resurgent Triple X Wrestling have some fascinating shows coming up – not least their August spectacular which includes the legendary Sabu, who’s up against South Wales’s very own Wild Boar, Mike Hitchman.

He’s looking forward to the match: “It will be a spectacle for sure – it’s not every day an ECW original comes to the UK.  I’m definitely going to show him who and what Wild Boar is all about. I’d recommend everyone coming to watch this match, I plan on going all out.”

And he’s already started coming up with some tactics. Well, three notes to himself. END_OF_DOCUMENT_TOKEN_TO_BE_REPLACED

I could not love CM Punk’s Grammar Slam featuring “they’re”, “there” and “their” more. I may use it as a teaching aid for my first years next semester.

But then…then I saw this (on the “Then/Than” episode).  END_OF_DOCUMENT_TOKEN_TO_BE_REPLACED

Question: should deliberate bleeding be banned from professional wrestling? 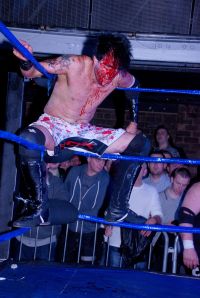 Friend of TOWIS Jimmy Havoc was on WrestleTalkTV last night discussing why he participates in hardcore matches and why he doesn’t think it should be banned.

This is partially in response to a hepatitis awareness campaign promoted by another Friend of TOWIS, Nigel McGuinness.

As regular readers (and indeed Havoc) know, I’m not a fan of deathmatches, and will actively avoid a show where I know that’ll be on the card (whether there’ll be extensive bleeding or not), so it’s possible that’s a large influence on my thinking on this.

However, I think that McGuinness would be a tough opponent in this debate. END_OF_DOCUMENT_TOKEN_TO_BE_REPLACED

With more and more promotions popping up around the UK, it’s good to see many of them focusing on using British talent.

Leicester Championship Wrestling (LCW) is one of them; their summer show Face Off in Enderby on August 24th has two matches announced so far, with new tag-team champions The Predators defending their titles, and new champion ‘The Heat’ L.J Heron facing Stixx.

“It’s great to have a platform for British talent,” says Xander Cooper, one of the LCW roster, who’ll be in action on the night in an as-yet-unannounced clash. END_OF_DOCUMENT_TOKEN_TO_BE_REPLACED