Well, if I type quickly, I might get this published before the show airs…spoilers, if so…

END_OF_DOCUMENT_TOKEN_TO_BE_REPLACED 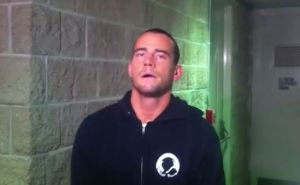 We already know that CM Punk is a god amongst men, with progressive views on many things.

This week he responded to Chris Brown’s Twitter taunts by challenging him to a fight, with proceeds from the bout going to a women’s refuge.

Meanwhile, over on RAW, John Cena would doubtless argue that Rihanna deserved everything she got from her boyfriend, because sometimes women just don’t know when to shut up and let the menfolk speak, and God forbid they should do anything that men judge inappropriate. END_OF_DOCUMENT_TOKEN_TO_BE_REPLACED

John Cena has a wife in WWE canon. I KNOW he does, because CM Punk told me so.

Now obviously offending her honour isn’t as bad as likening Cena to the New York Yankees. But she does exist.

So where is she now? END_OF_DOCUMENT_TOKEN_TO_BE_REPLACED

“Once upon a time, there were three little boys who worked in the indies.

“And they were each assigned very hazardous duties, such as working matches with Teddy Hart, and veering towards a TNA contract.

“But I took them all away from all that and now they work for me.

“My name is Vince.

“And I LOVE THE INTERNET, TWITTER, AND ALL YOU GOOFBALL SMARKS!” 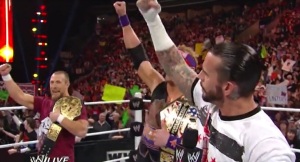 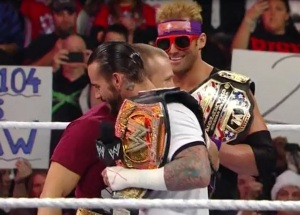 Not to cast aspersions on the originality of wrestling companies’ angles and characters, of course, but…

Ah yes, well, one has a title, and one has a petition for a title match. Apart from that, the similarity is fairly marked, wouldn’t you say?

If Ryder comes out next week with Mason Ryan in tow, we’ll know something’s up.

Sure, he’s been nagging his followers to hassle the WWE Shop with requests for broski headbands for ages now, but now he has surpassed himself. END_OF_DOCUMENT_TOKEN_TO_BE_REPLACED